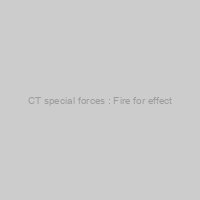 CT Special Forces: Fire For Effect will feature unique missions in the fight against worldwide terrorist networks. The game also benefits from a cutting-edge engine as well as a specific physics system. For the first time in this genre, physics will have a major impact on how you play the game. In spite of being a totally new gameplay experience, CT Special Forces: Fire For Effect stays true to the franchise values through non-stop action, varied gameplay sequences and of course several characters to choose from offering distinctive abilities, vehicles and equipment. Two characters that employ different skills Vast selection of weapons and equipment Terrifying aerial combat Requisition vehicles and change tactics Use jeeps, boats, hovercrafts and more!