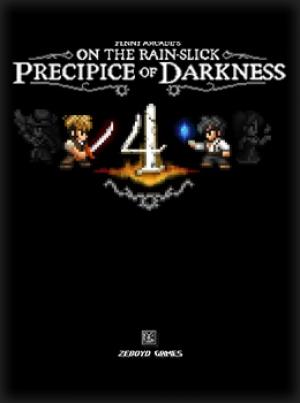 Penny Arcade Adventures: On the Rain-Slick Precipice of Darkness, Episode 4

The fourth episode begins with Gabe and Dr. Blood crashing down onto a hellscape. Without other options, Gabe is forced to pair with Dr. Blood, who gleefully explains that when they defeated Yog Modaign, the apocalypse happened and the world was destroyed. Those closest to the epicenter were tossed into a dimension called Underhell, so-called because it resembles a massive floating continent, directly below the massive floating continent of Hell. Gabe reasons that Jim, Moira and Tycho must have been sent to Underhell as well and bargains with Dr. Blood to aid him in searching for them. Dr. Blood reveals his motivations: in his youth, he traded the soul of his lover Hestia for knowledge. He since had come to regret his actions, and engineered a premature apocalypse in order to send himself to Underhell, where he hoped to reunite with Hestia. Dr. Blood also informs Gabe that since they are not of the same make-up as Underhell, they cannot harm its inhabitants, meaning they must use Underhell monsters to fight for them (similar to Pokémon). They head towards a large pillar structure where Dr. Blood believes he will find Hestia.