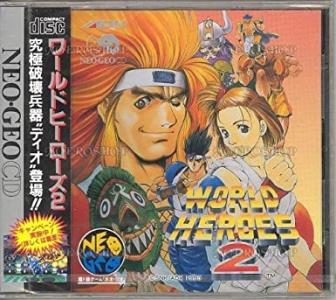 World Heroes 2 is a 1993 fighting arcade game developed and published by ADK with the assistance of SNK. It was originally released for the Neo Geo MVS arcade cabinet on April 26, 1993. It is the sequel to the 1992 fighting arcade game World Heroes, as well as the second title of the World Heroes series. It was even the first game with the "ADK" logo labeled within the game after the developer changed from its previous name "Alpha Denshi"; however, the "Alpha" logo was last used on one of the arcade flyers for World Heroes 2. It was followed by a sequel released just a year later titled World Heroes 2 Jet.