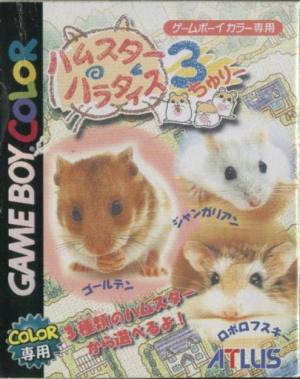 In this work, you can grow your favorite kind of hamster from Golden Hamster, Jungarian, and Roborovski. In addition to the mini rabbit that was popular in the previous work, a squirrel also appeared. There are also plenty of fun mini games to play with hamsters. In addition to familiar games such as ham wheels and ham catches, new games have been added, and there are more than dozens of them. The cage is also transformed into a two-story building. You can enjoy playing around by going up and down. Not only parks and shops, but also amusement parks and schools, where you can go out with hamsters has increased. You can now collect stickers that you can get at various places in the game, and exchange emails with your friends via infrared communication.