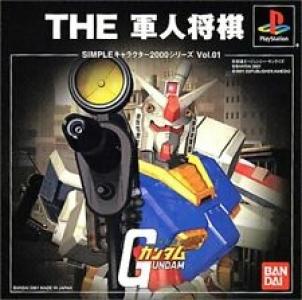 Simple Characters 2000 Series Vol.01 - Kidou Senshi Gundam - The Gunjin Shougi combines characters from Gundam series and the shogi (chess) game. Game Modes: - Story Mode: Advance through the game story defeating enemies in the different shogi matchs. - Vs Mode: Play againts the CPU or another player. - Edit Mode: Create different tactics in this mode with the game editor - Manual: A complete tutorial in japanese about how to play the game. Manufacturer's description: That "Gundam" was the chess boys in PS! While making full use of weapons or MS, as a leader of either Principality of Zion or Earth Federation, those historical scenes of the anime could be reproduced in military chess. You can win a piece of the opponent, you can organize your own troops, boost the production of a play in combat effectiveness, you can easily play without knowing the rules in the help function.  Features: - Third person perspective. - 2D graphics - Cartoon graphics - SCI-FI, Futuristic, Anime & Shogi themes.