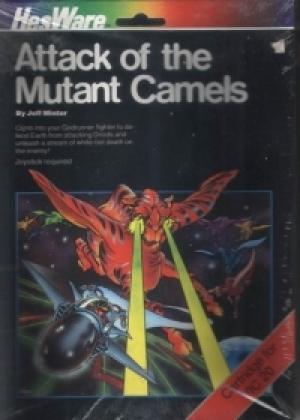 Attack of the Mutant Camels

Attack of the Mutant Camels (better known as Matrix: Gridrunner 2) is the sequel to Gridrunner. In this Centipede style game you play a retired captain of a starship, one of those who had won the previous war against aliens. You come out of retirement because the aliens are back, tougher than ever. Thus a second gridwar begins. You pilot your ship and shoot at chains of pods coming at you. As you hit the pods, they break into smaller independent chains. The aliens seem to have a sense of humor, though. Each pod in the chain coming at you looks like a...camel. Flying camels from outer space. As you start shooting the camels, you are attacked by guns from the bottom of the screen and from the left side of the screen. Even worse, a human traitor has joined the aliens, and when he appears on the screen, running across the grid on top, the guns get very accurate at shooting you. Luckily you can shoot traitors. Other twists include deflectors, which turn your bullets and even ricochet them back at you. The enemy fires back too. And as you advance in level, the enemy changes the direction of their attack. Not to be confused with Advance of the Megacamel which is also called Attack of the Mutant Camels in Europe.