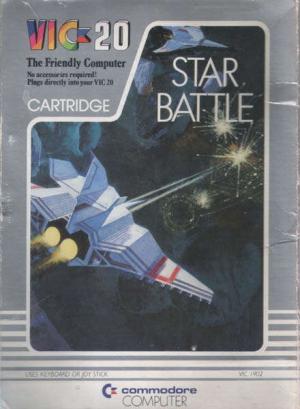 Star Battle is a fixed-screen shoot'em-up based on Galaxian. The player controls a ship at the bottom of the screen that can be moved left or right while shooting aliens near the top of the screen. There are four types of alien ships (blue, purple, red and yellow) each with different advance (movement) speed and worth different points. With time the gameplay speeds up gradually and ships often swoop down to the bottom of the screen, attempting to crash into the player's ship. The ship has three lives and after destroying all enemies the game is restarted with the score kept. A red marker in the bottom right corner is added for each completed wave. The game supports two players, taking turns.