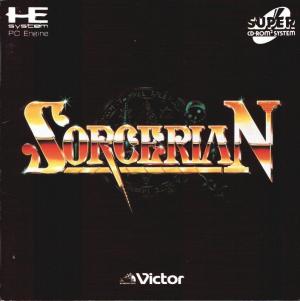 Sorcerian is the fifth game in the Dragon Slayer series. It is set in the fantasy land known as Pentawa, whose inhabitants are in constant need of protection from ferocious creatures roaming the wilderness. The king of Pentawa hires a party of adventurers, and their first assignment is to retrieve a precious sceptre from a dungeon, where it is guarded by the evil demonic lord Ouks. The game is an RPG with an unusual side-scrolling perspective and action-based combat, somewhat of a cross between Wizardry and platform games. Despite being a Japanese game, Sorcerian resembles Western RPGs of its time, focusing more on character development than story. In the beginning, the player creates a party of four characters, choosing between fighter, wizard, elf, and dwarf (races and classes are not distinguished). Beside the usual inns and shops, there are many things that can be done in the towns of the game, including complex development of magical spells (up to 120 spells of different disciplines), training to raise personal skills (strength, intelligence, etc.), enchanting weapons with elemental magic, as well as looking for part-time jobs. The view switches to side-scrolling when the party ventures into a hostile area. Combat is performed in real time, with the player controlling the entire party at once. The lead character can be changed at any time, and battle actions will be carried out by whoever is in front. Melee attacks and magic spells are unleashed by pressing corresponding buttons. The characters can also jump and interact with objects by bumping into them. Dungeons are usually maze-like, and some contain simple puzzles such as finding and activating hidden switches to open doors.