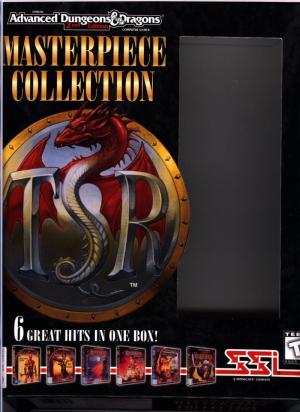 The Masterpiece Collection included six of SSI's official AD&D licensed games in one box. Containing : Dark Sun: Shattered Lands / Dark Sun: Wake of the Ravager / Ravenloft: Strahd's Possession / Ravenloft: Stone Prophet / Al-Qadim: The Genie's Curse and Forgotten Realms: Menzoberranzan. The games are all contained on four CD-ROMs, each of which also contains the relevant manuals in Adobe Acrobat format, allowing them to be printed out with exactly the same layout that they had originally.