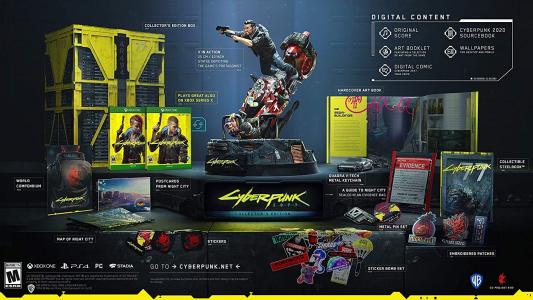 Cyberpunk 2077 is an open-world, action-adventure story set in Night City, a megalopolis obsessed with power, glamour and body modification. You play as V, a mercenary outlaw going after a one-of-a-kind implant that is the key to immortality. You can customize your character's cyberware, skillset and playstyle, and explore a vast city where the choices you make shape the story and the world around you. Become a cyberpunk, an urban mercenary equipped with cybernetic enhancements and build your legend on the streets of Night City. Enter the massive open world of Night City, a megalopolis that sets new standards in terms of visuals, complexity and depth. Take the riskiest job of your life and go after a prototype implant that is the key to immortality. The Collector's Edition includes: Collector's Edition box Case with game discs Collectible SteelBook(R) 25 cm / 10 inch statue depicting V - the game's protagonist - in action Hardcover art book Metal pin set Quadra V-tech metal keychain An annotated copy of A Visitor's Guide to Night City sealed in an NCPD Evidence Bag Embroidered patches World Compendium detailing the game's setting and lore Postcards from Night City Map of Night City Sticker bomb set Digital goodies included: Game soundtrack Art booklet featuring a selection of art from the game Cyberpunk 2020 sourcebook Wallpapers for desktop and mobile