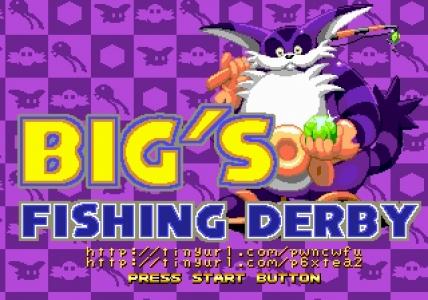 Big's Fishing Derby is a hack of Sonic the Hedgehog 2 for the Sega Mega Drive by flamewing that allows the player to play as Big the Cat on various fishing levels. Platforming is gone and the game takes place by a series of bodies of water where the player must catch Froggy while avoiding hooking underwater badniks. A second player can also play Eggman, and he competes with Big in the race to catch Froggy. Originally intended to be a secret mini-game in Sonic Classic Heroes, the idea grew beyond its original inception and ended up becoming a game of its own.