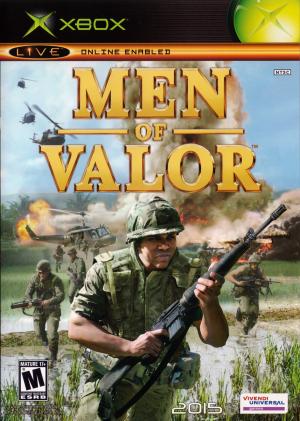 Men of Valor (abbreviated MOV) is a first-person shooter video game developed by 2015, Inc. and published by Vivendi Universal for the Microsoft Windows and Xbox platforms. The game was officially released for Xbox on October 19, 2004, in North America and on November 5, 2004, in Europe. The game was released for Windows on October 29, 2004, in North America and November 12, 2004, in Europe. Men of Valor is based on Unreal Engine 2.0 and simulates infantry combat during the Vietnam War. Men of Valor follows Dean Shepard and his squad of Marines from the 3rd Battalion of the 3rd Marine Division through sixteen missions during the Vietnam War including missions at the height of the Tet Offensive. In historically-based scenarios, the player assumes a variety of roles in which they man the door gun on a Huey helicopter, steer a riverboat along enemy-infested shores, battle their way through enemy tunnel complexes, and call down fire as a forward observer. Mission types include pilot rescues, recon patrols, POW rescue, and search-and-destroy ops.