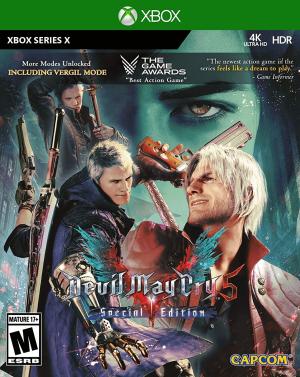 Devil May Cry 5 is a 2019 action-adventure game developed and published by Capcom. It is the sixth installment in the franchise not counting mobile games and the fifth installment of the mainline Devil May Cry series. Capcom released it for Microsoft Windows, PlayStation 4, and Xbox One on 8 March 2019. The legendary stylish action game is better than ever in the ultimate version of this multi-award-winning hit. New features include the addition of Dante's brother and arch-rival, Vergil, as a playable character, Legendary Dark Knight mode, next-gen graphics upgrades, and more.