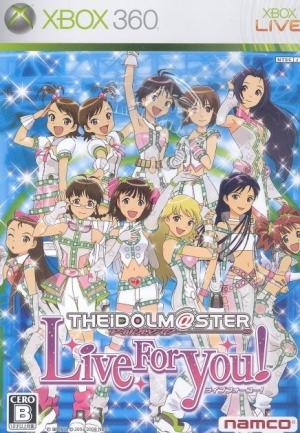 The Idolm@ster: Live for you! (JPN)

The Idolmaster Live For You! (アイドルマスター ライブフォーユー!, Aidorumasutā Raibu Fō Yū!, officially stylized as THE iDOLM@STER Live For You!) is a live simulation video game developed and published by Namco Bandai Games for the Xbox 360. It was released in Japan on February 28, 2008, as a sequel to The Idolmaster. The gameplay in Live For You! focuses on coordinating the concert event from The Idolmaster with higher customization of the songs, stage and costumes. The game features a rhythm minigame during performances, which was developed to add a sense of unity with the audience and add excitement. The player is also able to freely manipulate how the performance looks by adjusting the position of the camera towards the idols. The story is told from the perspective of a special producer in charge of coordinating the live performances of 11 pop idols from The Idolmaster series. Development for the game began in 2007 in response to player tendencies for the original The Idolmaster arcade game and its Xbox 360 port. The development team wanted to create a game that would allow players to easily view the live performances. The protagonist in the game was developed to be a "fan representative" who would coordinate the idols' performances, so any complex scenarios were left out, resulting in a simple story. Including downloadable content, the game features 74 songs the idols perform: 32 songs in original versions and 42 remixes of those songs, which have been released on several music albums. An original video animation episode produced by Actas was bundled with the limited edition release of the game. Live For You! sold 44,000 copies in its first week of release in Japan, and ranked as the fifth best-selling video game in Japan that week.