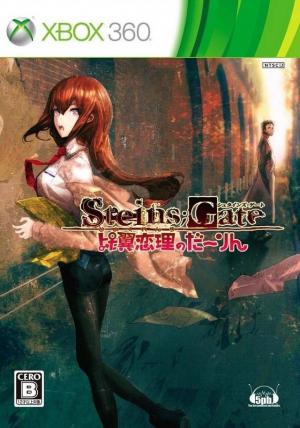 Steins;Gate: My Darling's Embrace is a visual novel video game developed by 5pb., originally released for the Xbox 360 in 2011. It has since been ported to several other platforms, and was released by Spike Chunsoft in English for the Nintendo Switch, PlayStation 4, and Microsoft Windows in 2019. It is part of the Science Adventure series, and a spin-off from the 2009 game Steins;Gate. The game is a romantic comedy set in a different world from the one in the original Steins;Gate, where the player builds romantic relationships with Steins;Gate characters. By making certain choices and interacting with the player character's cell phone, the player can affect the direction of the plot. The game was produced by Naotaka Hayashi, and featured scenario supervision by Tatsuya Matsubara, as opposed to the original Steins;Gate, where 5pb.'s Chiyomaru Shikura planned the story on his own; after having worked on the anime adaptation of Steins;Gate, he realized that, with the game world being fully established, he could let other writers work on it and bring in new ideas. The Xbox 360 release sold well, helping the sales of the Xbox 360 console in Japan. Critics enjoyed the game's writing and art, but criticized the opening theme.