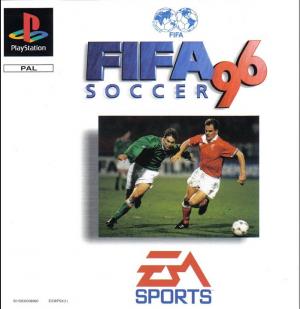 FIFA Soccer 96 (also known as FIFA 96: Virtual Soccer Stadium) is a video game developed by Extended Play Productions and released by Electronic Arts in 1995. It was released for the Mega Drive/Genesis, Sega Saturn, Sega 32X, Sega Game Gear, PlayStation, Super Nintendo Entertainment System and DOS systems. FIFA 96 is the third entry in the FIFA Series, its tagline being Next Generation Soccer. It was the first in the series to feature real-time 3D graphics on the Sega Saturn, PlayStation, 32X, and DOS versions, using technology called "Virtual Stadium". The SNES and Genesis editions used the FIFA '95 engine. It is also the first in the series to use real player names and positions, with ranking, transfer and team customisation tools.