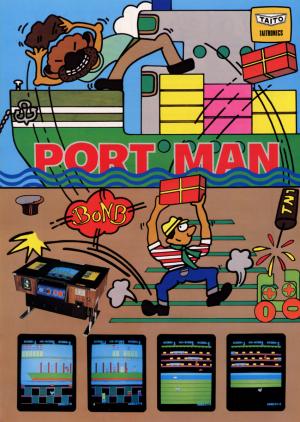 Port Man was produced by Nova Games Ltd. in 1982. Nova Games Ltd. released 4 different machines in our database under this trade name, starting in 1982. Other machines made by Nova Games Ltd. during the time period Port Man was produced include Intrepid, New Multi Game 5, and Street Viper. Game Play Catch the luggage that falls from the top conveyer belt and throw it up into one of four berths on the ship. You need to get four in each berth without getting hit by a rock thrown by the man on the ship, getting run over by the luggage cars or before running out of luggage on the conveyer belt. The second level, you throw a rock up at some crates of dynamite, knocking one down. You need to catch it before it hits bottom. When a crate reaches bottom it explodes, removing the lowest level of your playing area. If you are hit by a rock thrown by the man on the conveyer belt or if you are on the same level with the exploding crate, you lose a life. You get points for every crate you catch. Then you return to the ship only this time the speed has inceased.