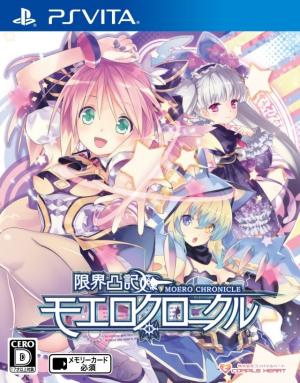 Moero Chronicleis Compile Heart's Dungeon RPG follow-up to Genkai Toki Monster Monpiece- includingCompile Heart's risque description of a "rubbing, pinching, panty-wearing RPG." The story follows Io, a young boy troubled by his profane and arguably perverted thoughts - creating a lot of difficulty when it comes to talking with girls.His relationship with his confedant and only real friend, a monster girl, creates some tension when the world starts experiencing natural disasters and hostility from the other monster girls! With rumors of a "Legendary Monster Girl"bent on world destruction starts to circulate, mankind is forced to take a stand. Io must now investiage the origins of the occurring phenomenons, taking his childhood monster girl friend along with him on his adventure into the world of monsters.