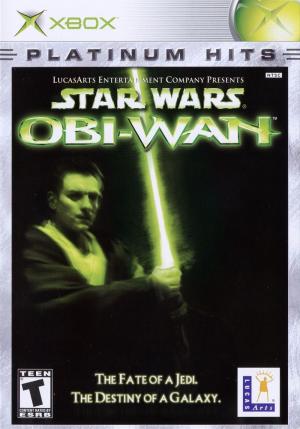 n Star Wars: Obi-Wan, the player controls Obi-Wan Kenobi during a sequence of events prior to and leading up to The Phantom Menace. The game is unique in that lightsaber combat is controlled using the right analog stick of the Xbox controller. By moving the stick in specific motions Kenobi will swing his lightsaber in a related motion. The character has a variety of Force powers at his disposal. One power provides a version of bullet time, slowing the area around the character, effectively allowing players to attack slowed-down enemies, or evade to cover. Other powers allow him to jump higher, move objects, and disarm enemies. Kenobi will perform a 180 degree turn with the press of a button, allowing the player to instantly spin and attack enemies behind them. Aside from the lightsaber, weapons such as blasters, ion grenades, and turrets can be utilized against enemies. The game supports a multiplayer mode called Jedi Battle, which allows two players to battle each other as any one of the Jedi characters unlocked. Characters may be unlocked by defeating them in the single player Jedi arena, which becomes available between mission