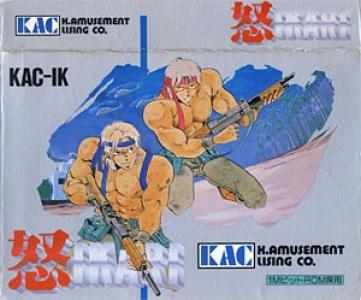 Ikari (aka Ikari Warriors) is an overhead military themed shooter developed by Micronics and conversion of SNK's arcade game originally released in 1986. The game revolves around two Rambo-like warriors (complete with torso attached shorts and red headbands) who crash in an enemy infested jungle. Their objective is clear - they must now proceed towards the enemy headquarters, blow up tanks, gun turrets, fortified bunkers and lynch the enemy leader. Our commando-warriors, Ralf and Clark, come equipped with a standard machine gun and throwing grenades. More weapons can be picked up from downed enemies such as Fire Bullets (F), Long Range gun (L), spread/triple shot gun or bomb grenades (B). Other special and secret items are also available for the picking such as Speed ups (S), kill all enemies on screen (K), the rare mega-ammo (H) that fully refills the player's ammunition supply or the knife that kills enemies by simply touching them. All the ranged weapons have limited ammo and must be continually resupplied. But the meat of the game really lies in the vehicles - a tank and an helicopter can be acquired along the way, they both are bullet-proof and deal a fair amount of damage to enemy units. They however run on fuel and simply self-destruct when depleted. Ikari features four gigantic levels and a two simultaneous player mode