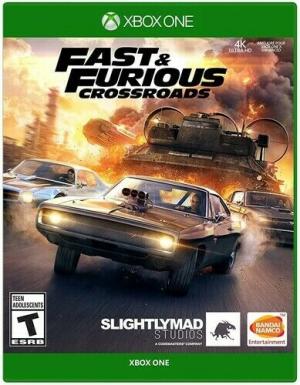 Fast & Furious Crossroads is an action-adventure video game set in the Fast & Furious universe. Gear up for fast, cinematic non-stop action in a new chapter of the Fast & Furious saga as you hunt down an international crime syndicate and pump the brakes on their plans. With adrenaline-fueled stunts and heists, gadgets, exotic locations, cars, and heroes from the films, Fast & Furious Crossroads casts you right at the center of the action. PLAY AS THE CREW Rev-up for an official new chapter in the Fast & Furious universe as the blockbuster film series’ Dom, Letty, and Roman – voiced by original film talent – return and put you at the center of the story. Featuring new crew members Vienna, voiced by Sonequa Martin-Green (The Walking Dead, Star Trek: Discovery), and Cam, voiced by Asia Kate Dillon (Billions, Orange is the New Black). GEAR UP FOR ALL THE CARS, GADGETS, AND LOCATIONS Drive iconic cars all curated with Dennis McCarthy, the official Fast & Furious car coordinator. Go on thrilling adventures across the globe – from the hot sands of Morocco and the glitz of Athens and Barcelona to the neon-lit streets of New Orleans. Deploy familiar gadgets from the movies and explore new ones to take down the enemy. TEAM UP FOR UNIQUE MULTIPLAYER FUN Get your own crew online for revolutionary team-based action. Level up to unlock new cars, customizations, gadget upgrades, vehicle wraps, personalization items, and more. Unlock bonus content. Track and compare your Fast & Furious Crossroads experience with all your stats, match histories, achievements, trophies, and more with friends via the God’s Eye-like MOSAIC system.