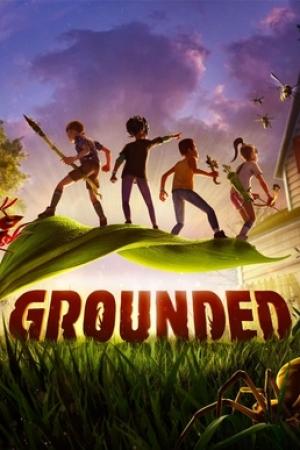 Grounded is a survival game that can be played either in first-person or a third-person. In the game, the protagonist is shrunk to the size of an ant and must strive to survive in a backyard. In the game, the player character needs to consume an adequate amount of food and water, or they will lose health due to starvation or dehydration respectively. The backyard is filled with various bugs and insects, including spiders, bees, dust mites, mantis and ladybugs. Different insects serve different purposes in the game. For instance, spiders are one of the game's apex predators that will hunt down the players, ladybugs can lead players to food sources, and aphids can be cooked and consumed for food. Players can also cut down grass to collect dewdrops. The game has an accessibility option for players who have arachnophobia, which allows players to decide how scary spiders are going to be in the game. As players progress in the game, they will visit new areas in the backyard. The game's difficulty would slowly increase and enemies that are more dangerous would be introduced. Throughout the game, players need to scavenge resources in the world in order to construct a base so as to defend themselves from hostile enemies, in particular during nighttime as some of the insects become more aggressive. The resources can also be used to craft different tools, traps and weapons, such as axes, spears and bows and arrows, to defeat enemies. Players also need to manage their stamina as the playable character may become exhausted in sustained combat. The game can be played solo, though it also has a four-player cooperative multiplayer mode.