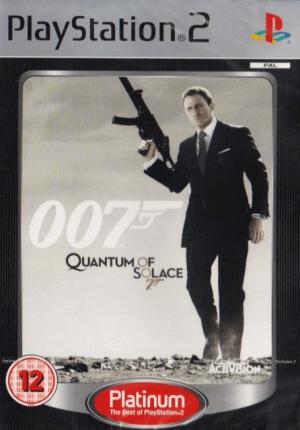 007: Quantum of Solace is a first-person shooter (third-person shooter for Nintendo DS and PlayStation 2) video game based on the films Casino Royale and Quantum of Solace. The game was released for Microsoft Windows, Nintendo DS, PlayStation 2, PlayStation 3, Wii and Xbox 360. The game was released on October 31, 2008 in Europe, November 4, 2008 in North America, and November 19, 2008 in Australia. The game's release coincided with the release of Quantum of Solace. The game is the first James Bond title published by Activision; the company acquired the video game licence to the James Bond franchise in 2006. The game was released on Microsoft Windows, PlayStation 3, Wii and Xbox 360 developed by Treyarch, Beenox ported the Microsoft Windows and Wii versions alongside Treyarch, Vicarious Visions and Eurocom developed their own versions for Nintendo DS and PlayStation 2. It is powered by the IW 3.0 engine. It is first to feature Daniel Craig's voice and likeness, as well as those of Eva Green, Judi Dench, Mads Mikkelsen, Olga Kurylenko and Mathieu Amalric. It is also the only Activision-published James Bond title to be developed primarily by an American studio, as the later Bond games published by Activision would be developed by British studios Eurocom (in Derby) and Bizarre Creations (in Liverpool).