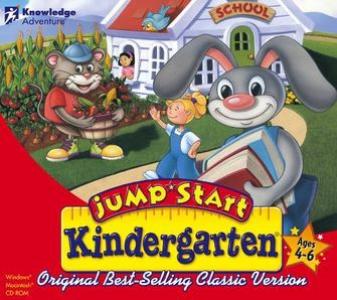 JumpStart Kindergarten (known as Jump Ahead Classic Kindergarten in the UK) is an educational personal computer game developed by Fanfare Software and released by Knowledge Adventure on the MS-DOS platform in 1994 (v1.0). It was the first product released in the JumpStart series and, as its name suggests, it is intended to teach kindergarten students. According to the Knowledge Adventure founder Bill Gross, it is the first educational software program that covers the entire kindergarten curriculum.[1] It was ported to the Windows and Macintosh systems in 1995 (v1.2). It was updated with a new version on 24 November 1997 (v2.0). In 2000, the game was specially designed on VHS. That same year it was updated with additional content in a 2-CD Deluxe version in 2000 (v2.6), that included JumpStart Around the World. Eventually it was replaced in 2002 by JumpStart Advanced Kindergarten.