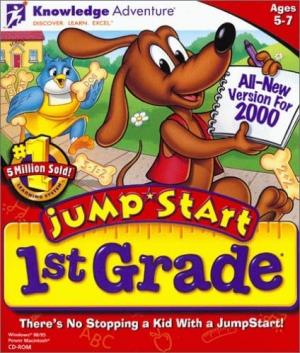 JumpStart 1st Grade (known as Jump Ahead Year 1 in the United Kingdom) is a personal computer game created by Knowledge Adventure in 1995 intended to teach a first grade curriculum. It was reissued in 1999 with new box art, was updated significantly in 2000, and was replaced with JumpStart Advanced 1st Grade in 2002, which was later replaced with JumpStart 3D Virtual World: Trouble in Town. The original 1995 version (also referred to as the Classic Version) was the first appearance of Frankie, a brown, anthropomorphic dog who would go on to become the mascot of the JumpStart series.