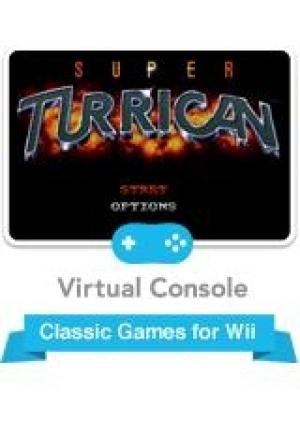 Super Turrican is the next generation installment of the famous Turrican Series. Once again it is up to the U.S.S. Freedom Forces to get into their Turrican Assault Suits and drive back the forces of "The Machine". Similar to it's predecessors, Super Turican features large levels that are crammed with secrets and can be explored freely and in any direction. To get rid of the numerous enemies, Turrican can use three upgradeable shots: A spreadshot, a powerful laser and a rebound that bounces off of walls. Additionally, there is a Freeze-Beam that can be used to temporarily freeze enemies. It is fully rotatable, and therefor also a great help in discovering secret capsules. These capsules contain powerups and can often be used to reach secret areas. Last but not least, Turrican has the ability to transform into an energy wheel (as long as he has enough special energy), which enables him to lay mines and even makes him invincible.