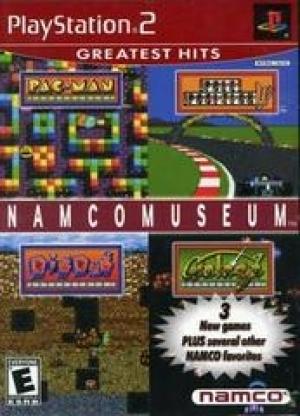 The PlayStation 2 in 2001, Xbox, and Nintendo GameCube in 2002 were host to yet another edition of the series. The collection on these consoles includes all the games from Namco Museum 64 and Namco Museum for Dreamcast plus: Pac-Man Arrangement (1996) Galaga Arrangement (1995) Dig Dug Arrangement (1996) Pac-Attack (1993) - hidden game; unlocked by scoring 20,000 in Pac-Man Pac-Mania (1987) - hidden game; unlocked by scoring 15,000 in Ms. Pac-Man Pole Position II (1983) This edition of Namco Museum is the first collection in the series to include a made-for-console game (Pac-Attack, originally released on the Genesis and the Super NES and also previously included in the Japanese-only Namco Anthology Vol. 2, and Pac-Man Collection). The "Arrangement" games in the collection were originally on the arcade's Namco Classic Collection Vol. 1 and Vol. 2. The pitch of the music in Pac-Man Arrangement and Dig Dug Arrangement has been changed slightly from the original: it is higher pitched than in the arcade versions. This compilation was released only in North America on all three of the consoles on which it was released.