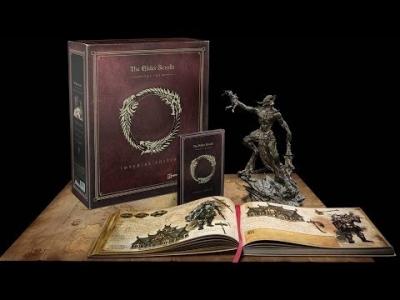 The award-winning Elder Scrolls saga goes online! In The Elder Scrolls Online, experience one connected world and stay up-to-date with everything your friends are doing in one of the most socially enabled games ever. Whether you play alone or with your friends, the game's innovative combat system allows you to focus on action and tactics, not the UI. Use any weapon at any time, no matter your class, and customize your abilities to play the way you want as you uncover the mysteries of Tamriel and seek heroic quests on your own terms. Explore the far reaches of Skyrim, the mysterious lands of Morrowind, the sprawling metropolis of Daggerfall and beyond. The choices you make, from the alliance you join to the battles you fight, will shape your destiny and the world of Tamriel. The Imperial Edition includes: Molag Bal Statue, The Improved Emperor's Guide to Tamriel, Physical Map of Tamriel, Steel Case Packaging - Digital Content includes: Play as an Imperial, White Imperial Horse, Mudcrab Vanity Pet, Rings of Mara