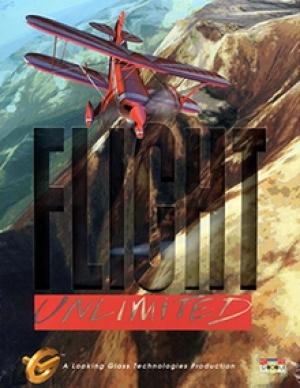 Flight Unlimited is a three-dimensional (3D) flight simulator video game: its gameplay is a simulation of piloting real-world airplanes. Players may control the Bellanca Decathlon, Extra 300S, Pitts Special S-2B, Sukhoi Su-31 and Grob G103a Twin II sailplane. The game begins at the fixed-base operator (FBO) interface—a traversable 3D room whose contents represent menu options. For example, the player interacts with a row of scale airplane models to select an aircraft, and with a world globe to change airfield locations. Six settings are available, including Sedona, Arizona and Springfield, Vermont. The player may choose to begin flight on a runway or taxiway, or in the air. Aircraft are controlled via keyboard, joystick, head-mounted display or specialized input devices such as pedals. During flight, several third- and first-person camera angles may be selected. For example, the third-person Flyby View places the camera in front of the plane as it flies past, while the first-person Three-Way View displays more information about the plane's position and speed than other angles. Certain camera angles, including the Three-Way View and 3-D Cockpit view, provide the player with simulated flight instruments such as an altimeter, airspeed indicator, accelerometer, variometer and tachometer. The game is designed to allow players to perform aerobatic maneuvers such as the Immelmann turn, tailslide, Lomcevak and Cuban Eight. Performances may be recorded and played back, with controls that allow the player to pause, rewind and fast forward. At any time, the player may stop a recording and resume flight from that point.