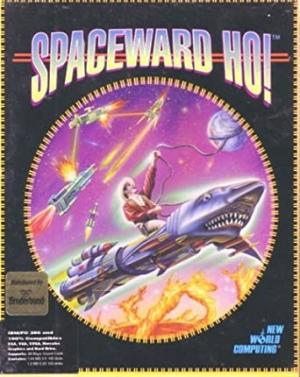 The gameplay of Spaceward Ho! focuses on efficiently extracting the resources of conquered worlds while correctly anticipating and countering opponents' actions. Spaceward Ho! can be played against a computer AI, or against other human players over the internet (via spacewardho.net). Previous versions of the game allowed also LAN-based networked play, but this feature has been disabled in the Mac OS X version. It has a very simple gameplay compared with most other games in the genre (such as Master of Orion). Depending on the initial settings, games take from about ten minutes to an hour. Its small but dedicated fanbase considers the simplicity to be elegance, and its designers boast that it has gotten faster and more intuitive to play with each new version. All unnecessary complexity has been stripped from the game, resulting in a fast-paced game that still manages to be very engaging. The core of the game is the two-dimensional map of "planets". Each "planet" has three characteristics: temperature, gravity, and metal. Temperature and gravity are both used to determine how fast colonies can grow and how large they can become (based on the preferred temperature and gravity for the colonizer, which is different for each player); the difference is that a player may spend money to change the temperature ("terraforming") while gravity cannot be changed. Colonies with low population take a certain amount of money per turn to support, while colonies with high population earn money for their owner. Metal can, with money expenditure, be mined for use with shipbuilding. A planet's stats are unknown until explored (to get current info on a planet, a player must have ships in orbit with no enemies present). Travel between planets is via hyperspace (ships cannot encounter each other except at planets), and the time it takes depends on the distance between the origin and the destination on the map, as well as on the speed of the ship in question.