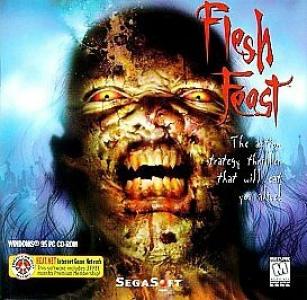 Flesh Feast is a third-person action game with the in-game camera showing a top-down perspective in most instances. The game's plot concerns a secret ingredient invented by the food company Nutrition Applied Science and Technology Inc. (NASAT), which has been released and has infected the entire island's water supply. The citizens are dying and rising as flesh-hungry zombies, buried dead, break through the ground to attack the living. The player proceeds through fourteen levels controlling three teams of characters, each team consisting of one main character and two sub-characters. Throughout play, hordes of zombies attack the player and must be repelled with weapons which are found throughout levels. A radar display shows the location of items relative to the characters. The objective is to unlock the final showdown at NASAT headquarters by completing each of the game's levels, containing the disaster. Each level is split into three sectors representing difficulty levels, with one of the player's teams of characters assigned to each. Completing sectors in order is not required. Levels take place over several locales such as a dock, a graveyard and a shopping mall. Characters are controlled directly or indirectly; players can manoeuvre their characters via the keyboard or click the mouse on enemies or items to command their teams to attack or collect items. Completing each sector involves locating the exit; typically this also entails obtaining keycards and other items to remove barriers.