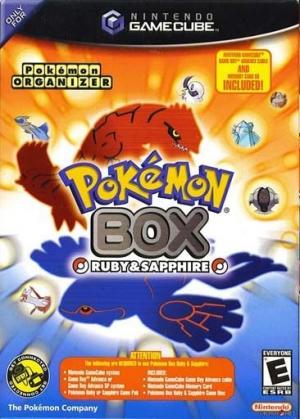 Pokémon Box Ruby and Sapphire is a Pokémon game for the GameCube. This game's purpose is similar to that of My Pokémon Ranch for the Wii in that it was released as a game which would give the player extra box space for his or her Pokémon. The player would link up his or her Game Boy Advance system to the GameCube with a Pokémon Ruby and Sapphire game cartridge in it and it would give the player 1,500 more slots to store his or her Pokémon, and the player in turn could still play the Game Boy game on the GameCube. This game is however not compatible with Pokémon Emerald version and was only available in the United States through the Pokémon Center's store in New York City,