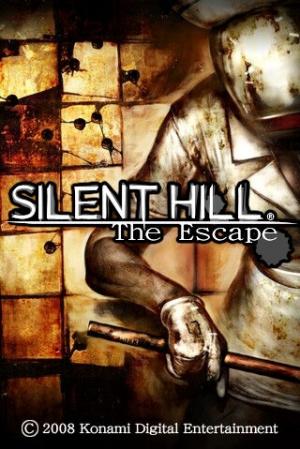 Silent Hill: The Escape is an entry in the survival horror video game series Silent Hill for mobile phones. The game objective is for the player to make their way through ten levels by finding the key and bringing it to the locked door at the end of each level. The player must slide their fingers to move the character in a first person perspective and tap the screen to shoot enemies (such as Evil Nurses and possessed Wheelchairs as well as a monster similar to the Butcher and Pyramid Head). The game mechanics also include the ability to tilt the device in order to change the camera perspective. This is used in more ways than the perspective. It is also used while reloading the player's revolver, as you must align it correctly in order to reload. There are four different characters to play as. You can play as a human, alien, a woman named Mira, or Robbie the Rabbit. Each character is unlocked after beating the game with the previous character. The game is a simple way to pass time, featuring several different monsters.