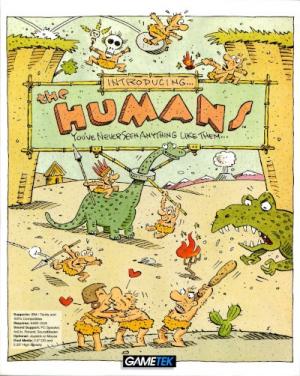 The Humans is a puzzle game similar to Lemmings whose objective is to manipulate the given number of humans, taking advantage of abilities and tools to achieve the level's goal, usually consisting of finding a certain tool, killing a certain number of dinosaurs or bringing at least one human to the end point, marked by a conspicuous colored tile. Each level is independent of the next, each with its own tools, goal, and set number of humans allowed per level. The only things that carry from level to level are the total number of humans in the player's tribe and the player's total score. The player controls one human at a time, and may switch between any human at any time. In order to complete a level, it is often necessary to use certain tools or abilities, such as stacking to reach a high ledge. For instance, the spear, a tool obtained in the first level of the game, may be thrown across gaps to other humans, used to jump chasms, thrown to kill dinosaurs or other enemies, or brandished to hold off dinosaurs temporarily. Certain levels also feature NPCs like the pterodactylus that can be ridden in order to reach otherwise unreachable platforms, that cannot be controlled, but can be used to the player's advantage. Several forms of enemy appear and can range from dinosaurs that eat a human if he is unarmed and within its walking range to spear-wielding members of enemy tribes. There can be up to eight controllable humans in a level, though some levels only allow as few as three. Though there is a preset number of humans allowed per level, there is no limit to how many humans are in the player's tribe. If a human dies, he is replaced by one from the tribe as long as there are humans there to replace him. During the course of the game, the player is given chances to rescue other humans and add them to his tribe. If there are fewer humans in the player's tribe than the minimum required number for any given level, the game is over. Each level, however, has a password that can be used to jump to that particular level from the beginning of the game.