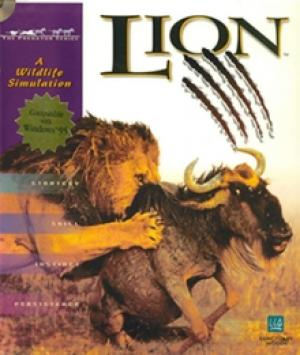 In Lion: A Wildlife Simulation, you can choose to play as a specific lion (each lion is rated in endurance, hunger tolerance, and strength) or a pride of five as you try to complete twenty scenarios, ranging from finding a missing cub to escaping the tranquilizer guns of a zoo crew. If you would rather roam the land by yourself, you can select an open-ended simulation and just try to survive. Both the simulation and scenario modes are played from an overhead view of the Serengeti, spanning 1,600 game screens across and more than 3,500 screens down. Since this is a simulation designed to replicate the life of a lion, you'll have to take time to rest, play with other lions in the pride, hunt prey, group hunt, eat and drink, fight with other lions, and even mate. Each lion has three senses that will help him or her survive: sight, hearing and smell. Using these abilities wisely could mean the difference between your lion finding animals to eat and dying of starvation. There are also deadly poachers, hyenas and the Masai warriors, who will attack with spears if their cattle is threatened. Options include choosing the amount of prey in the world, climate (dry, normal, or rainy), difficulty level, number of poachers, and game duration (six months, one year, three years, eight years or infinity). The game also includes a multimedia Lion Safari option, where you can learn more about lion origins, hunting patterns, prides, nomads, and communication patterns.