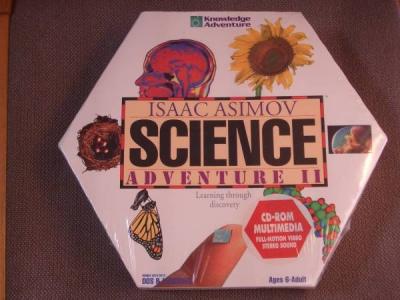 Asimov died in April 1992, and this collaboration between his works and the developers behind the program was one of the last before he passed.[2] The game's articles were based on Isaac Asimov's Chronology of Science and Discovery.[3] The game teaches topics ranging from roller coaster acceleration to planetary orbit to pulleys.[3] The central hub of the program is a reference screen, which displays text panels, pictures, and timeline, and a globe.[3] The designers described the program as an educational software toy - a sort of intellectual playground, to encourage curiosity but with no agenda.[2] The virtual science museum has over 150 rooms, and over 1000 illustrated, interactive, and interlinked articles by Isaac Asimov.[4] source: https://en.wikipedia.org/wiki/Isaac_Asimov%27s_Science_Adventure