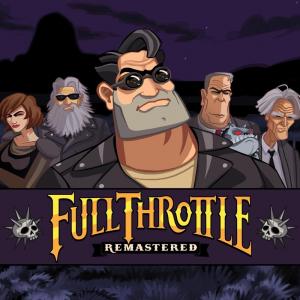 This Remastered version of Full Throttle replaces 640x480 SVGA graphics with all new hand-drawn high resolution artwork. Music and sound effects have also been remastered for the new version. The game contains both original and remastered version in one and switch between old and new graphics and audio can be done in mid gameplay or mid-cutscenes. While the original graphics used 4:3 aspect ratio, the new graphics supports 16:9 and corresponds almost identically to classic look in proportions so switching between graphic modes doesn't change much of the picture as it just changes the way artwork is drawn and shows clarity on higher resolution. This remastered version contains unlockable bonus content not available in the original release which has BGM, original making-of artwork, and developers' commentaries accessible via main menu.