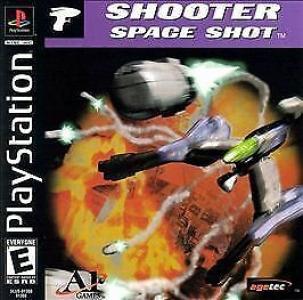 Shooter: Space Shot, known in Japan as Simple 1500 Series 35: The Shooting (SIMPLE1500シリーズ 35 The シューティング), is a horizontally scrolling shoot 'em up. Originally released in Japan as part of the Simple series in 2000, it was released by in North America by A1 Games and Agetec. Players can play through the game or practice their various skills in two different modes of play using only one ship. Though still quite vague, the story takes place in the future: a space war is going on between a technologically advanced Empire and a fairly well advanced Republic which is in control of a task force of space-ship pilots - known as the Republic Special Forces - that are regularly sent in to destroy large enemy fortifications and mechs. Players assume the role of one of the fighters named Cyber Spears who, along with his companions, fight their missions whilst reporting the ever developing technology of their enemies.