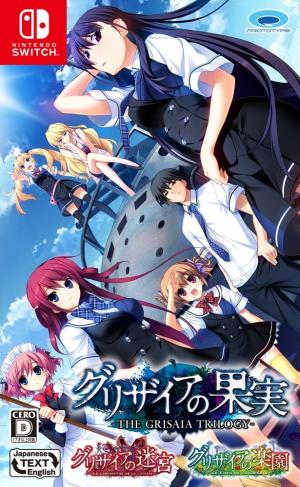 For the first time since its humble beginnings as a PC game, and after the handheld, manga, and anime adaptations that followed, the complete "The Fruit of Grisaia" Trilogy is now available on the Nintendo Switch™ system in one complete collection! Set in an academy isolated from the outside world, the heart-rending tales of five heroines begins! The whole "The Fruit of Grisaia" series in one bundle! All of the episodes from "The Fruit of Grisaia," "The Labyrinth of Grisaia," "The Eden of Grisaia," and "The Fruit of Grisaia -SIDE EPISODE-" previously released on handheld consoles are now included in one bundle for your enjoyment! Text available in Japanese or English! Text can be set to either Japanese or English (audio is Japanese only). This includes in-game text, options, and the digital manual. Language settings can be changed at any time. - Taken from the Nintendo Online Description A physical version was released in Japan on November 07, 2019 with an English translation available on the cartridge. It was released simultaneously on the North American E-shop as well.