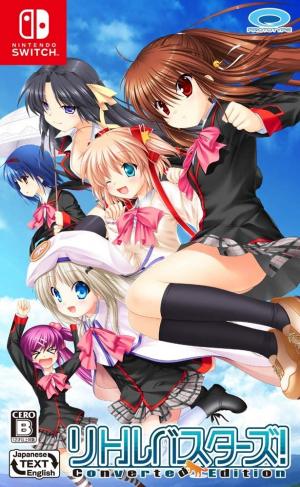 Since its humble beginnings as a PC game, the "Little Busters!" visual novel has continued to evolve. In the past decade, we have seen spin-off games and console adaptations, as well as the release of comic, novel, and anime adaptations. It's easy to see why; the underlying theme of friendship in this romantic adventure game has had players hooked from the very start. Now, get ready to laugh and cry your way through the "Little Busters!" story as the game comes to Nintendo Switch! Play in English or the original Japanese! Both English and Japanese text is available in-game (audio is Japanese-only). This option is not only available in the main game, but in the settings menu, and digital manual too, with the option to switch between the two whenever you like. Don't worry if you come across a cultural reference you don't understand; you can check out their explanations in the "Busterpedia!" - From the Nintendo website description. A physical version of this game was released in Japan on April 23rd, 2020 with an English translation (Text only) available on the cartridge. Pre-orders included the special drama CD “‘Our’ Morning.” The North American version was released on the Nintendo E-shop on the same date.