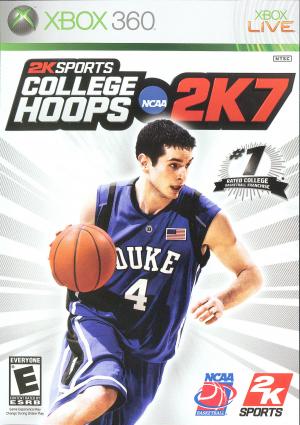 College Hoops 2K7 is an American college basketball video game initially released on November 20, 2006 for the Xbox and Xbox 360 and released later for the PlayStation 2 (December 11) and PlayStation 3 (March 13, 2007). It is the 5th installment of the series, which began with NCAA College Basketball 2K3. It features former Duke and current Los Angeles Clippers guard J. J. Redick on the cover. It is produced by 2K Sports. It was the first college basketball game for the PlayStation 3. Redick was a special correspondent to the development of the game and added his signature shot style in motion capture. Every school competing in Division I NCAA College Basketball is included in 2K7, including D-1 transitional independents (such as New Jersey Institute of Technology). The game also features the ability to change and modify rosters. Coaches Roy Williams, Lute Olson, Billy Donovan, John Calipari, Jay Wright, and Sidney Lowe lend their likenesses to the game.[citation needed] There is a preview show with hosts Greg Gumbel and Clark Kellogg.[citation needed]