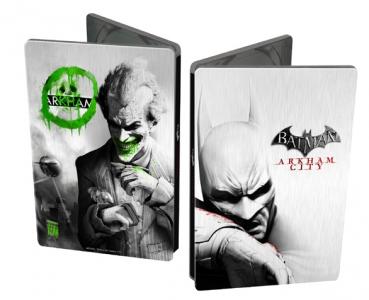 A series of "Steelbook Edition" versions of the game were also made available, featuring the standard game with a metallic case. The Joker-themed Steelbook includes the "Joker's Carnival" challenge map, the animated film Batman: Under the Red Hood on DVD (Blu-ray for PlayStation 3), and the Bronze Age Batman skin DLC. Three other villain-themed steelbook cases were also offered, featuring the likenesses of Two-Face and the Penguin. A fourth steelbook featuring Catwoman was released, containing the Batman: Earth One alternative skin for Batman. PAL Rating - 15