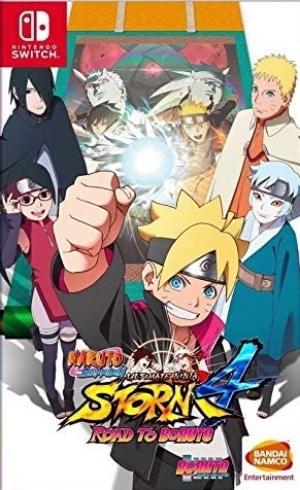 Experience the complete NARUTO STORM 4! Pre-order NARUTO SHIPPUDEN: Ultimate Ninja STORM 4 ROAD TO BORUTO and get the following content: - Early unlocks for 11 ninja costumes from the Boruto era - Early unlocks for 22 playable characters - Early unlocks for Momoshiki and Kinshiki Otsutsuki Note: The pre-order bonuses are early unlocks, but they can also be obtained by progressing through the game. The latest game in the Ultimate Ninja Storm series is finally here for Nintendo Switch™! It features all DLC, including the latest "NEXT GENERATIONS" DLC Update Pack. Relive the Fourth Great Ninja War that unfolded in Naruto Shippuden, and experience the story of Boruto: Naruto the Movie featuring Naruto's son, Boruto Uzumaki. Plus, choose from 124 ninja—the most in the series! Join in action-packed battles, whenever and wherever you want!