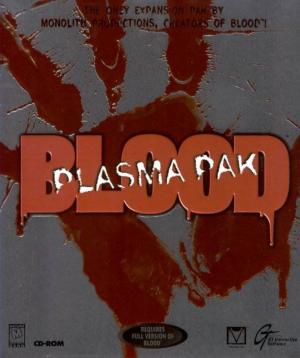 Released in September 1997, the Plasma Pak expansion adds several new features to Blood; a new episode with nine single player levels titled "Post Mortem" is included, along with two new multiplayer Bloodbath levels, one of which was modeled after Monolith's corporate offices, for a total of 11 levels. New enemies are included in the Plasma Pak, and all of them are featured in the extra episode; the new creatures include two new Cabal loyalist types, Chrysallid pods, miniature Calebs, and a new boss, the Beast. There are no new weapons added to Caleb's arsenal, though some new weapon abilities are introduced; the Tesla Cannon can now be wielded akimbo (provided the appropriate power-up is collected), while the Napalm Cannon and Life Leech have new secondary attacks. The Plasma Pak also integrated a large number of bug fixes which had been previously addressed by several patches. After Caleb learns the Cabal is training replacements for the fallen Chosen, he sets out to stop the cult's plans. Caleb moves into Cabal territory, wreaking havoc in a temple complex, then storming the inner temple. Satisfied the temples have been dealt with, Caleb enters the training ground for "The Chosen". In order to rest, Caleb destroys each of the four "Chosen" in training and the Beasts within them.