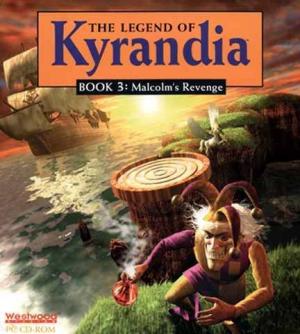 Also know as: The Legend of Kyrandia: Book Three

Virgin Interactive Entertainment presents Westwood Studios' wittiest, prettiest and most ambitious work to date. Featuring sumptuous 3-dimonsional rendered scenery and crisp digital speech throughout, Malcolm's Revenge is the third in the illustrious Kyrandia series - and the first to be developed specifically for CD-ROM. As punishment for the murder of Kyrandia's King and Queen, Malcolm the warped court jester was turned to stone. Years later, a freak accident has set him free to exact his sweet revenge - and you are going to help him. Use magic, guile, cunning and devious disguises to explore the island of Kyrandia and beyond, from the Ends of the Earth to the UnderWorld. Discover the secrets of the Isle of Cats and the Cave of Wonder, and meet a cast of quirky characters including pugnacious pirates, the foolish Fish Cream Jerk and the dead Queen Katherine.