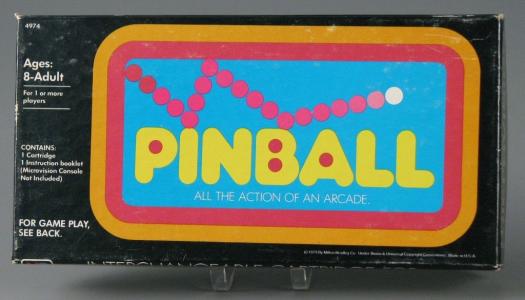 Pinball was one of four launch titles for the system alongside Block Buster, Bowling and Connect Four. Below from Retro Game Reviews: https://www.retrogamesreview.co.uk/2015/11/pinball-microvision-review.html You use your paddle to continuously bounce a ball onto the four bumpers in an attempt to get a high score. Each time you hit a bumper you get one point; if you strike it four times it lights up and subsequent hits earn you two points. Once all four bumpers are lit up you gain three points for each additional hit. Before starting you can choose how many lives you want (1, 3, 5, 7 or 9), the speed of the ball (slow or fast) as well as the size of your paddle (double or triple pixels). The interesting thing about the latter option is that if you select a double paddle the ball can only ricochet diagonally (no straight shots) which makes the gameplay more challenging. The control knob is used to move your paddle around and it works remarkably well and responds to your inputs perfectly. The game plays more like Block Buster (1979, Microvision) than an actual pinball simulation as the first thing you'll notice is the lack of flippers. It's disappointing as other Microvision games (mainly Baseball with its swinging bat motion) prove that this functionality could be implemented on the handheld. The ball speed is manageable though and there's not much LCD motion blur. It doesn't take long to get a good rally going and the ball patterns are unpredictable as it frequently careens off at odd angles; this keeps you on your toes and continually tests your reactions. The most enjoyable aspect is carefully manoeuvring the ball in an attempt to light up all four bumpers; it's tricky but finally doing so is immensely satisfying. Although it is a very simple premise understanding the scoring mechanics is key as the more you play the more addictive the gameplay becomes. Once you've had a few practices each game can last a while without becoming stale and I found myself getting deeply engrossed in beating my high score. Pinball might be a very loose interpretation of the game but if you give it a fair chance you'll find it has fun gameplay and fantastic controls. There's quite a few options to choose from and before long you'll be racking up impressively high scores and having a great time doing so!