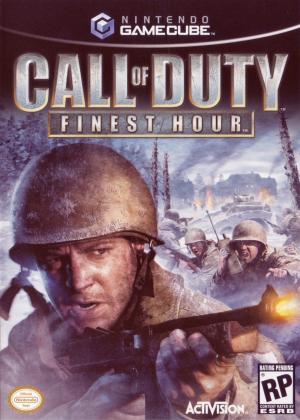 Call of Duty: Finest Hour is a 2004 first-person shooter video game. It was released for the GameCube, PlayStation 2, and Xbox on November 16, 2004 in North America. It was the first console installment of Call of Duty, developed by Spark Unlimited and published by Activision. It was followed up by a sequel, Call of Duty 2: Big Red One, in 2005. Although it is based on the original Call of Duty franchise for Microsoft Windows, it has a completely different storyline and acts as a side-story/expansion of the main game. In the spirit of previous Call of Duty games, it features six intertwined stories and battles based on real events from the perspective of soldiers on each side of the allied campaign (U.S., British, and Soviet). The game's music was composed by Michael Giacchino, who previously worked on the original Call of Duty and the Medal of Honor franchise. AC/DC singer Brian Johnson provides the voice of Sergeant Starkey, one of the British commandos