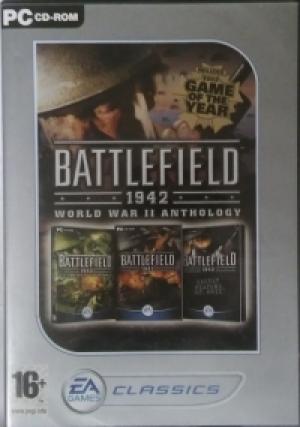 Battlefield 1942 is a first-person shooter video game developed by Digital Illusions Creative Entertainment and published by Electronic Arts for Microsoft Windows and Mac OS X. The game can be played in single-player mode against the video game AI or in multiplayer mode against players on the Internet or in a local area network. It is a popular platform for mod developers, with many released modifications that alter the gameplay and theme. In-game, players assume the role of one of five classes of infantry: Scout, Assault, Anti-Tank, Medic, and Engineer. Players also have the ability to fly various World War II fighter aircraft and bombers, navigate capital ships, submarines, and aircraft carriers, man coastal artillery defenses, drive tanks, APCs and jeeps, and take control of anti-aircraft guns and mounted machine guns.[1] Each battle takes place on one of several maps located in a variety of places and famous battlefields in all of the major theaters of World War II: the Pacific, European, North African, Eastern, and Italian Fronts. Combat is between the Axis Powers and the Allies. The location determines which nation-specific armies are used (for example, on the Wake Island map, it is Japan versus the United States, while on the El Alamein map, it is Germany versus the United Kingdom). The maps in Battlefield 1942 are based on real battles and are somewhat realistically portrayed.