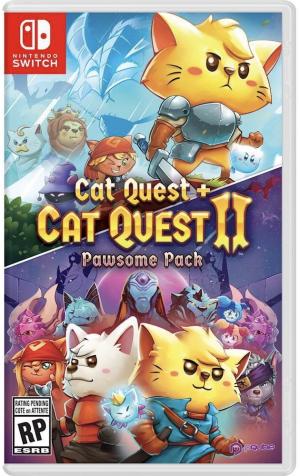 Cat Quest is an open-world action-RPG set in a fantasy realm of cats. Sequel to the award-winning original, Cat Quest II now lets you play solo or with a friend, as both a cat and dog as you embark on an epic journey! Quest in a world filled with magic, defeat curious monsters, collect stat-boosting loot and go on a catventure like never before! Expanding on the original with more explosive spells, new weapon options, and local co-op - Cat Quest II improves on all aspects of the universally-adored indie sensation. Enjoy both games in one tidy package! Features: * This pawsome pack includes Cat Quest and Cat Quest II for a multitude of catventures - with a reversible cover! * Brand new story set in the world of Felingard - and beyond! * All new co-op gameplay. Play as both cat and dog, either alone or with a friend! * New weapons types Master swords, staves and more to become a fur-midable fighter! * More spells bring even more furry judgement to your foes. * New passive abilities, whose attributes can be mixed and combined for endless paw-sibilities! * Exciting, and varied dungeons filled with new traps and obstacles, making every pounce into the unknown a fresh experience!