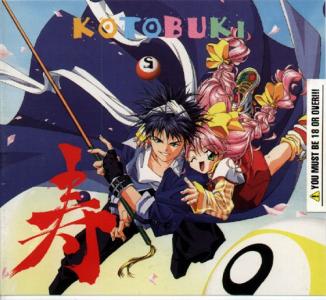 The lead characters from C's Ware's hentai games grew tired of constantly being forced to act in pornographic scenes. They joined forces and created an artificial realm called the "C's Ware Land". They also swore that no hentai player shall ever use them again for their dubious purposes. However, two characters that never made it to any C's Ware game - the boy Pao and the girl Pino - decided to venture into the dangerous land and defeat the former protagonists. Kotobuki is a puzzle arcade game with similarities to Lode Runner and billiard games. The players can choose to control either Pao (for harder difficulty) or Pino. The game is divided into sections, each dedicated to a particular C's Ware game and composed of several stages. The seven games featured are Fatal Relations, Love Potion, Xenon, Desire, Amy's Fantasies, Eve Burst Error and Gloria. Top-down stages are populated by recurrent enemies which must be defeated by hitting them with billiard balls. Pao and Pino are armed with queues and have to hit the cueball in such a way that a billiard ball with the highest possible number will hit the enemy. They can also defend themselves by standing behind balls, and dig holes in the ground to trap enemies. After completing a regular stage the player faces a boss character.